A wonderful day exploring the beautiful city of Oxford and the quintessential Cotswolds villages of Bampton, Burford and Bibury.

We recommend this tour for anyone with limited time who wants to experience the city of Oxford and the Cotswolds villages on a relaxed day out from the city.

* This itinerary may be reversed in winter due restricted opening hours at some attractions.

A wonderful day out exploring the legendary stone circle of Stonehenge, Runnymede and Windsor Castle, England’s oldest Royal residence. With a mix of inspiring landscapes, ancient Castles and rolling hills, you will truly get to experience the real England.

We recommend this tour for anyone with limited time who wants to experience Stonehenge, Runnymede and Windsor Castle on a relaxed day out from the city.

A one day tour to take in the highlights of the ancient Roman settlement of Bath, an active spa for the last two millennia , the village of Lacock that has featured in many well-known movies and television shows and the Neolithic stone circle of Avebury, before returning to London in the early evening. This tour is a perfect introduction to one of the most beautiful cities in England, the surrounding villages and the magical standing stones at Avebury

2 days to take in the highlights of the charming Cotswolds with its beautiful villages, the ancient stone circle of Avebury, village of Bampton as featured in TV’s Downton Abbey and the grandeur of Bath and Oxford.

Stay 1 night in the historic Roman town of Cirencester. (**On some dates accommodation may be in other locations eg, Bath or Cheltenham).

Three leisurely days spent in the south eastern corner of England, an area known for its natural beauty and rural charm. Discover ancient castles, medieval Canterbury cathedral and stand atop the natural marvel of the White Cliffs of Dover. Take time to savour the flavours of Kent, from the legendary Whitstable Oysters to the crisp English wines produced in this area.

3 Days to explore the best of the west, including Stonehenge, the Jurassic Coast, Dartmoor, Glastonbury and the historic cities of Exeter and Bath.

Stay 2 nights in the historic Roman city of Exeter.

4 Days exploring deep into the Heart of Wales and England from Snowdonia National Park to the historic cities of Chester, Lincoln and Cambridge. Discover the scenic beauty of the Peak District National Park and visit the impressive Conwy Castle in North Wales and elegant Chatsworth House. Stay 2 nights in the historic medieval city of Chester and 1 night in Lincoln.

5 Days exploring Shakespeare country, the World Heritage Site of Ironbridge, the mountains and castles of North Wales, the refined elegance of Chatsworth House, the scenic beauty of the Peak District and Yorkshire Dales with time to discover the historic cities of York and Cambridge.

Stay 2 nights in the historic town of Shrewsbury and 2 nights in the mediaeval city of York. (**Please note – on some dates this tour may stay in Chester for the first 2 nights)

A fantastic combination of the “Heart of England” and “York, the Dales, and Lake District” tours to give you a memorable journey through some of the best scenic and historic locations in England and Wales, you’ll visit Stratford upon Avon, Conwy to Chatsworth House, the Lake District, York and Hadrian’s Wall.

(* in July this tour will stay in Windermere rather than Keswick

Please note: Combination tours – These itineraries are made up of individual tours which are scheduled to link up en route without having to come back to their starting point. Clients will be able to enjoy the individual styles and stories of the different driver/guides as well as a different group of travelling companions on each part of their trip.

Day 1 Depart from London and make your way to William Shakespeare’s birthplace Stratford on Avon, home to the Tudor thatched cottage and gardens of his wife, Anne Hathaway. You will have time to explore the magnificent village of Stratford and enjoy lunch, before continuing to the World Heritage site of Ironbridge. Set in a stunning forested gorge on the river Severn this historic valley boast the world’s first ever iron bridge and a host of attractions to choose from. It was once described as the most extraordinary district in the world! From here you travel to the beautiful riverside town of Shrewsbury for the next 2 nights.

Day 2 This morning your tour will take you into the heart of North Wales You will travel through beautiful green valleys and lovely little towns and villages then visit the picture book medieval castle of Conwy, built by Edward I in the late 13th century. You will also explore the impressive mountain scenery of the Snowdonia National Park including the huge Dinorwic slate quarries and the dramatic Pass of Llanberis in the shadows of Snowdon – Wales’ highest peak. You will hear tales of Owain Glyndwr and the Welsh struggles for independence before travelling back through the borderlands into England.

Day 3 To the northeast of Shrewsbury lie the hills of the Peak District National Park with a mixture of stunning scenery and beautiful little villages. You will take a scenic route through the Park to the village of Castleton then in the afternoon you can visit the famous mansion house and gardens of Chatsworth, home to the Cavendish family, Duke of Devonshire. Chatsworth is often named the UK’s favourite country house and a visit will reveal some of the finest collections of furniture, priceless paintings, Old Master drawings and neo-classical sculptures. From here you will travel east out of the hills to the wonderful historic city of York where you will spend the next 3 nights.

Day 4 Today you have a choice of things to do. You can spend the whole day at leisure exploring the medieval heart of York, a city whose rich history goes back to the time of the Romans, Vikings and Normans. Visit some of the fascinating museums, the amazing York Minster or just lose yourself in the maze of narrow streets and ancient city walls. Alternatively you could join your guide on a half day excursion into the Yorkshire dales visiting the historic market towns of Knaresborough or Ripon and some of the attractive little villages and beautiful countryside of the Eastern Dales, followed by a free afternoon in York.

You will leave the London based tour here and be picked up tomorrow by the tour bus from Edinburgh. Your driver/guide will let you know all the details of pickup times for the next day.

Day 5 This is a leisurely day that gives you the flexibility to spend more time exploring the medieval heart of York before joining our excursion to the North Sea coast of Yorkshire. Our journey begins in the late morning when we head for the magnificent North Yorkshire Moors National Park. Lunch will be in Whitby, a bustling fishing port and the inspiration for the fertile imagination of author Bram Stoker, who stayed in the Royal Hotel on the western side of Whitby while writing his famous novel Dracula. After lunch, and free time in Whitby, we travel to the fishing village of Robin Hood’s Bay *, a perfectly preserved conservation village of winding lanes and narrow alleys before returning towards York.

* The minicoach cannot access the main village because of local restrictions. The coach will drop you at the top of the village and you must walk down (and back up!) a steep hill to reach the old village centre.

Day 6 You will be collected from your accommodation and head west into the heart of the Yorkshire Dales National Park. Established in 1954, the Yorkshire Dales National Park has outstanding scenery, a range of wildlife habitats and a rich cultural heritage. It’s a special place – a fantastic outdoor arena for recreation and peaceful relaxation and a haven for wildlife. Continuing West our route takes us through the Northern Dales an area of outstanding natural beauty that is the centre of the Dales cattle trade. Our final leg of today’s journey takes us high up into the remote hills of the Yorkshire Dales before descending into the lively market town of Keswick where you will be dropped off at your accommodation and are then free to explore this charming town.
(**During July this tour may stay in Windermere instead).

Day 7 After breakfast you head a short distance out of town to the mysterious Castlerigg standing stones, thought by many to have been built over 5,000 years ago and the scene of ancient rituals. You then travel on to the shores of Ullswater, described as England’s most beautiful lake, where you can take a forest walk to see the mighty Aira Force waterfall. Continuing south over the narrow and winding Kirkstone Pass you stop at Windermere where you have the option to take a leisurely cruise on the water or simply eat lunch while enjoying views of the mountains and lakes. After lunch you travel around the southern tip of Windermere and on towards Coniston Water after which you arrive at the picturesque conservation village of Hawkeshead, where the poet William Wordsworth attended Grammar School. After free time to explore the village you take the narrow country lanes north towards Grasmere, which Wordsworth described as “the loveliest spot that man hath found”. There is free time to visit Wordsworth’s Dove Cottage or enjoy the peace and tranquillity of the Wordsworth Daffodil Garden by the River Rothy. In the late afternoon you return to Keswick.

Day 8 Leaving the Lakes behind us we start our climb of Hartside Pass which stands at over 1900ft. On a clear day the hills and mountains of Scotland and the English Lake District are clearly visible as we follow the route of the old sheep drovers between England and Scotland. Stopping at Hadrian’s Wall, built by Emperor Hadrian to keep the Scots out of the Roman Empire, there is an opportunity to explore some of the Roman remains and walk in the footsteps of the Roman Centurions who patrolled this desolate frontier. Following the ancient Roman Dere Street, we cross into Scotland and continue on to the Border town of Jedburgh for refreshments in the shadow of the ruins of Jedburgh Abbey. Our final stop is at the world famous Scott’s View, encompassing outlooks of the River Tweed and the Cheviot Hills that broadly form the Scottish-English border before continuing north to Edinburgh. 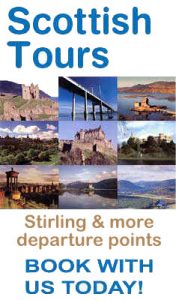